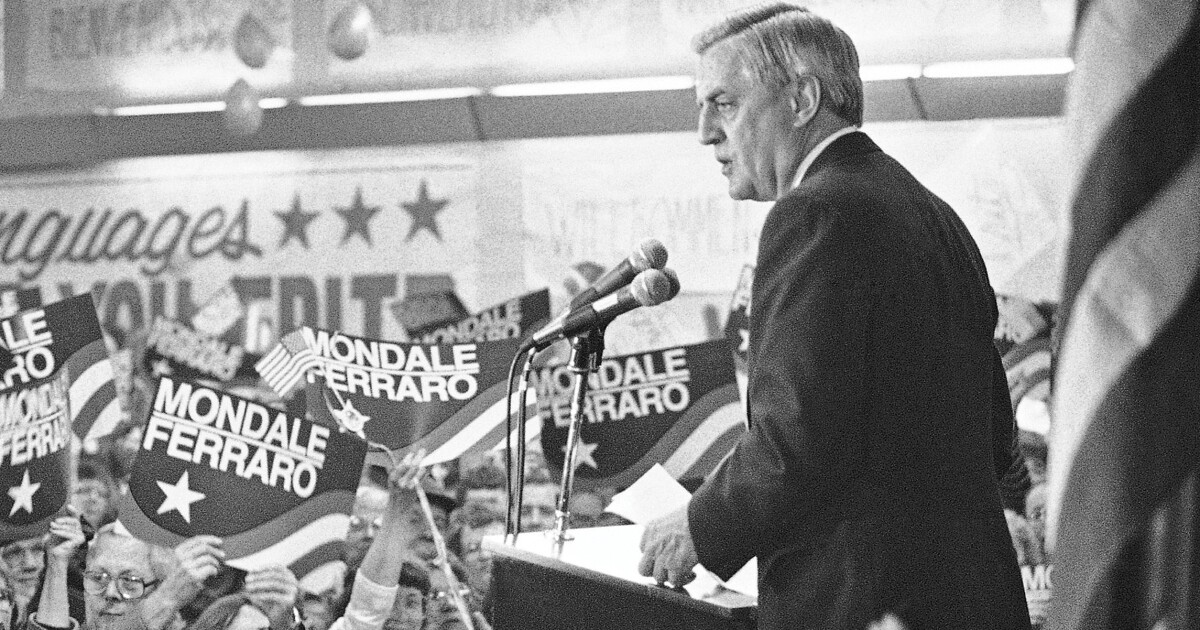 Former senator, ambassador to Japan, and Vice President Walter Mondale died on April 19 at the age of 93. His obituaries have highlighted the fact of his landslide loss to President Ronald Reagan in 1984 but without dwelling on the larger lesson of Mondale’s attempts at centrism and big-tent liberalism, presenting an incomplete picture of the alternate path the Democratic Party might have followed.

At the time of his presidential election against Reagan, the pro-union, pro-affirmative action, pro-taxation Mondale seemed to be the apotheosis of liberalism, the force that Reagan had rebuffed with his successful “Morning in America” campaign. Yet the Mondale who was on the left end of the political divide in 1984 would likely have been a conservative force in today’s Democratic Party.

In Jimmy Carter’s administration, Mondale broke new ground by having a West Wing office. He had seen how uninvolved his Minnesota colleague Hubert Humphrey had been as vice president under Lyndon Johnson, so he negotiated a bigger role as part of his agreement to join the Carter ticket. This arrangement brought him a West Wing office, but not, alas, a West Wing bathroom. Mondale’s political adviser Michael Berman had tried but was unable to secure this amenity for his boss, which national security adviser Zbigniew Brzezinski did have. As Berman told Mondale, “There’s no way to change this bathroom back again!”

Commode aside, Mondale’s West Wing perch gave him more involvement in policy than vice presidents had up to that time, and he used his influence to challenge the Carter foreign policy team on its tough-on-Israel policies. Warring aides Secretary of State Cyrus Vance and Brzezinski disagreed on nearly every issue in the Carter administration except for one: being hard on Israel. Unfortunately, Carter agreed with them, which meant that Mondale, along with other pro-Israel aides such as domestic policy adviser Stuart Eizenstat, was constantly fighting an uphill battle. Mondale later recounted that the administration’s Israel policies “made my life miserable.”

In 1979, Mondale attempted to rescue Carter from his disastrous July 15 “malaise” speech. He tried so hard that Eizenstat recalled Mondale becoming “visibly upset, and his face became so red with anger that I feared for his health.” Mondale’s instincts were right, but his effort failed: Carter went ahead with one of the most misguided speeches in presidential history.

Mondale also recognized the degree to which the Carter foreign policy made some centrist Democrats uncomfortable. The nascent neoconservatives wanted to have a meeting to discuss their concerns on this front, something that Mondale, with a keen antenna for intra-Democratic disturbances, helped to arrange. The visitors, who included Norman Podhoretz, Midge Decter, Jeane Kirkpatrick, Ben Wattenberg, and Elliott Abrams, met with Mondale in the Cabinet Room of the White House during the 1980 race between Carter and Reagan. As Abrams described it, “Mondale comes in and does a dazzling 15-minute presentation: ‘Come home. You’re Democrats. Not this idiot from Hollywood.’ Really, a terrific job.” Unfortunately for Mondale, he was followed by his boss, who lacked Mondale’s political skills and alienated the whole group. As Abrams later recalled, “I suppose that everybody in that room except for Carter and Mondale voted for Reagan.”

For all his other accomplishments, Mondale remains best known for that 1984 loss to Reagan. Of that, three things are worth recounting. First, he won the nomination over Gary Hart in part due to his skillful deployment of the famous “Where’s the beef?” line in a Democratic debate against Hart. He also made Reagan look old in their first debate, only to be destroyed in the second thanks to Reagan’s devastating use of the line, “I am not going to exploit, for political purposes, my opponent’s youth and inexperience.” To his credit, Mondale immediately knew Reagan had gotten him and later said, “I think the campaign ended right there.” Finally, Mondale had to bear the pain of that loss the rest of his life. He once asked 1972 election loser George McGovern, “How long does it take for the pain to go away?” McGovern responded, “I’ll let you know when I get there.”

Despite the pain, Mondale bore it well. Conservatives today would be better off with more Fritz Mondales in the Democratic Party. So would America.

Tevi Troy is a senior fellow at the Bipartisan Policy Center and a former White House aide. His latest book is Fight House: Rivalries in the White House from Truman to Trump.