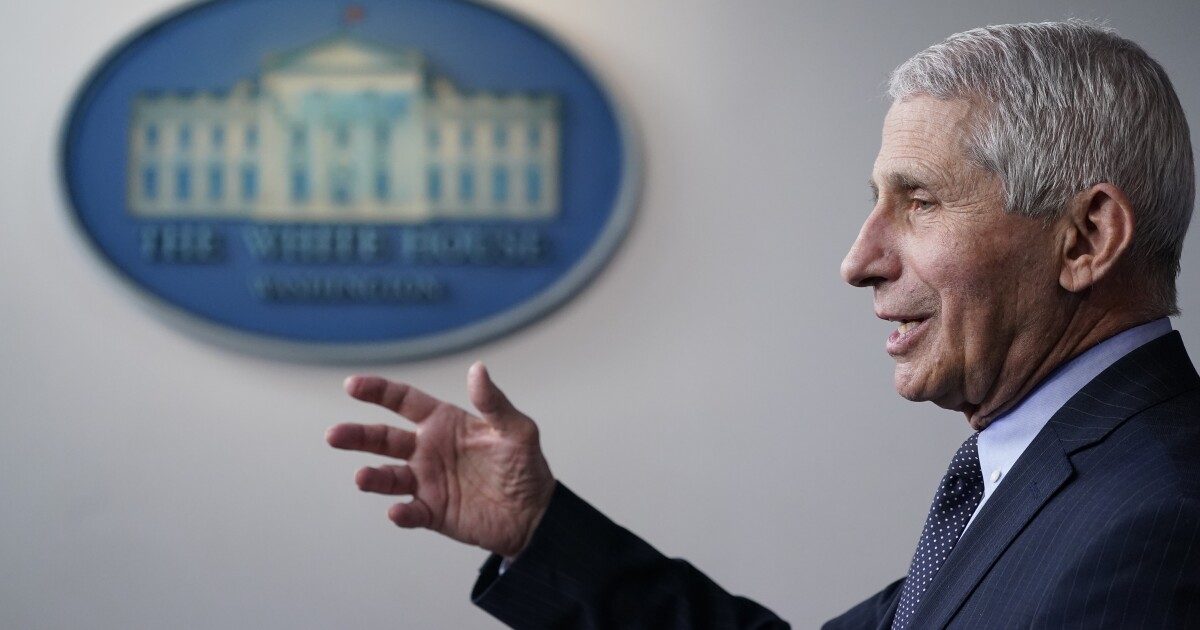 Anthony Fauci testified it would have been “almost a dereliction of our duty” if the National Institutes of Health had not worked with China to study coronaviruses as he defended NIH money going to fund “collaboration” with “very respectable Chinese scientists.”

EcoHealth Alliance received at least $3.7 million from NIH from 2014 to 2020, and Peter Daszak, a key member of the WHO-China joint study team and the leader of EcoHealth, steered at least $600,000 in NIH funding to the Wuhan Institute of Virology for bat coronavirus research. Daszak criticized the United States for appearing skeptical of the WHO’s findings earlier this year and defended China to Communist Party-linked outlets.

Fauci, who leads NIH’s National Institute of Allergy and Infectious Diseases, defended NIH’s collaboration with EcoHealth, and EcoHealth’s coronavirus study collaboration with the Wuhan lab, during an appearance before a House appropriations subcommittee on Tuesday.

“Why do research in collaboration with our Chinese colleagues? Well, the underlying reason for that is that we had a big scare with SARS-CoV-1 back in 2002, 2003, where that particular virus unquestionably went from a bat to an intermediate host to start an epidemic and a pandemic that resulted in 8,000 cases and close to 800 deaths. It would’ve been almost a dereliction of our duty if we didn’t study this, and the only way you can study these things is, you’ve gotta go where the action is,” Fauci said. “So, I often say, somewhat tongue-in-cheek, you don’t want to study bats in Fairfax County, Virginia, to find out what the animal-human interface is that might lead to a jumping of species. So we had a modest collaboration with very respectable Chinese scientists who were world experts on coronavirus, and we did that through a sub-grant from a larger grant to EcoHealth. The sub-grant was about $600,000 over a period of five years. So it was a modest amount. And the purpose of it was to study the animal-human interface, to do surveillance, and to determine if these bat viruses were even capable of transmitting infection to humans.”

Officials from both the Trump and Biden administrations say the Chinese government has worked to thwart an independent investigation into the origins of the virus, and both administrations have cast doubt on the manner in which the study from China and the World Health Organization was conducted in early 2021. Though the WHO-China report said a jump from animals to humans was most likely, Trump officials, and Republican leaders especially, have pointed to the possibility of an escape from the Wuhan lab.

Fauci and Francis Collins, the leader of the National Institutes of Health, are adamant in insisting that NIH did not fund “gain-of-function” research at the Wuhan lab. But Fauci and Collins also admit they don’t actually know what the secretive Chinese lab has been up to.

Earlier in the Tuesday hearing, Rep. Andy Harris, a Maryland Republican, asked Collins about the Wuhan lab and gain of function research.

“They were not approved by NIH for doing gain of function research,” Collins testified. “We do not — and that’s the official governmental identification of that term, by the way. We are, of course, not aware of other sources of funds or other activities they might’ve undertaken outside of what our approved grant allowed.”

Harris then noted that “We could have sent money through EcoHealth Alliance. Money could have ended up at the Wuhan Institute of Virology, which might be doing gain of function research” and added that “because I do know that money is somewhat fungible — once you send money to institutes … it bothers me a little bit that we would send money to an institute that might be doing gain of function research, especially China.”

Rep. Mark Pocan, a Wisconsin Democrat, critiqued Harris later in the hearing, claiming it “seems to be the new narrative that’s out there that somehow, let’s not worry about vaccinating people and getting the economy going, let’s figure out how to somehow say there’s a different way this all started.”

Harris followed up later, saying, “I just wanted to correct the record — I think Mr. Pocan paraphrased what my question was about the Wuhan institute. It did not have to do with globally not funding overseas research. It had to do with, through the indirect cost associated with grants, sending money to the Wuhan Institute of Virology when we don’t know if they’re doing gain of function research.”

A State Department fact sheet released in January contended that Wuhan lab researchers “conducted experiments involving RaTG13, the bat coronavirus identified by the WIV in January 2020 as its closest sample to SARS-CoV-2 (96.2% similar)” and that the lab “has a published record of conducting ‘gain-of-function’ research to engineer chimeric viruses.”

“The U.S. government has reason to believe that several researchers inside the WIV became sick in autumn 2019, before the first identified case of the outbreak, with symptoms consistent with both COVID-19 and common seasonal illnesses,” the State Department fact sheet said.

The fact sheet also said that the Wuhan lab “has engaged in classified research, including laboratory animal experiments, on behalf of the Chinese military since at least 2017.”

Fauci said earlier this month he is “not convinced” about COVID-19 emerging naturally, despite prior comments to the contrary.

Rep. Ben Cline, a Virginia Republican, also pressed Fauci and Collins on NIH funding ending up at the Wuhan lab. Collins promised to respond to recent Republican letters asking NIH to explain its relationship with the Wuhan lab and any U.S. funding of gain of function research.

Fauci said Tuesday that “gain of function” means “taking a virus that could infect humans and making it either more transmissible and/or pathogenic to humans” and insisted that “that categorically was not done” at NIH in relation to the Wuhan lab.

Richard Ebright, a professor of chemistry and chemical biology at Rutgers University, said earlier this month that grants provided by NIH to EcoHealth met the definition of “gain-of-function research of concern” under a 2014 pause. The professor concluded that “the Wuhan lab used NIH funding to construct novel chimeric SARS-related coronavirus with the ability to infect human cells and laboratory animals” and that “the research was, unequivocally, gain of function research.”