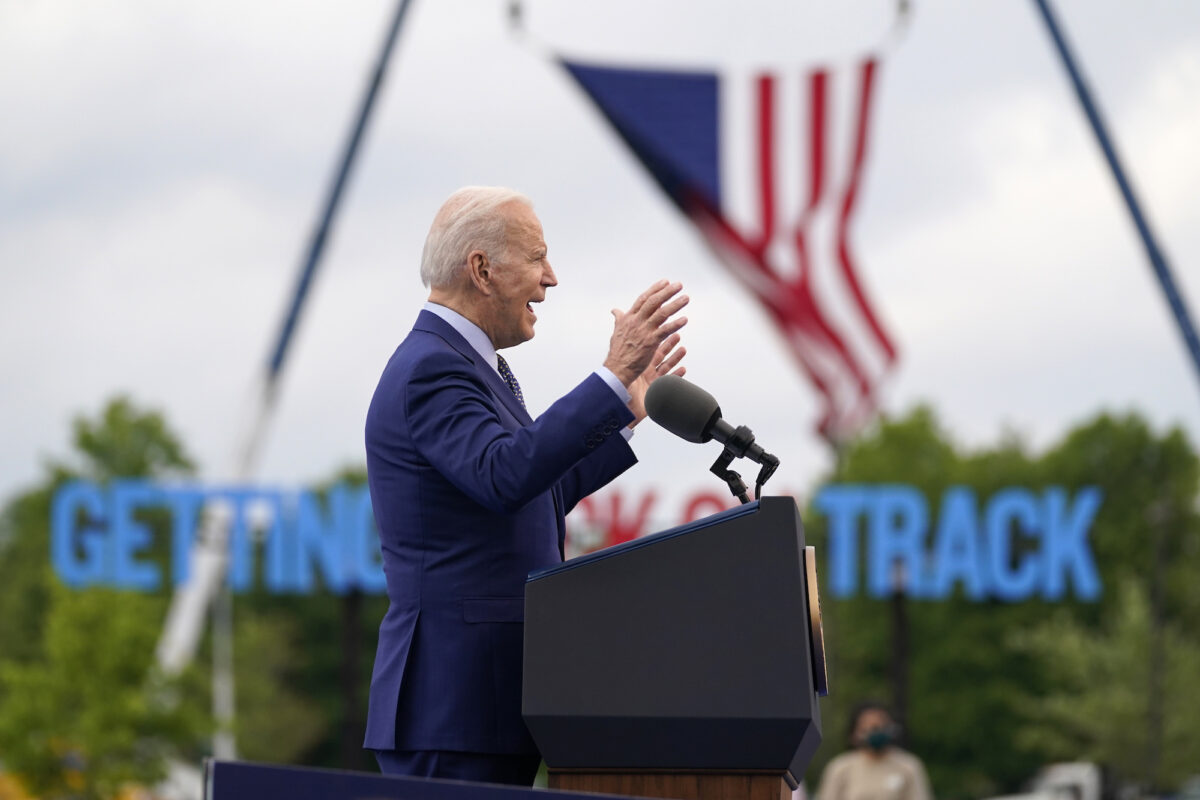 President Joe Biden spoke at a drive-in rally in Georgia on Thursday, seeking to build public support for $4 trillion in new spending on infrastructure and a vast expansion of the federal social safety net, to be paid for chiefly by tax hikes on corporations and wealthy Americans.

Moments after Biden took to the stage at the Infinite Energy Center in Duluth, a suburb of Atlanta, he was interrupted by protesters calling for an end to private prisons, chanting, “end detention now!”

Biden acknowledged the demonstrators, saying, “I agree with you,” to which the protesters responded with cheers. “There should be no private prisons, period,” Biden added. “They should not exist and we are working to close all of them.”

Speaking on the 100th day after taking office, Biden touted his administration’s response to the COVID-19 outbreak, including on the distribution of vaccines and relief checks that were part of the $1.9 trillion American Rescue Plan. Biden then pitched his proposed $2.3 trillion American Jobs Plan and newly unveiled $1.8 trillion American Families Plan, calling them “once-in-a-generation” investments and pressing his contention that the plans would rebuild the nation’s crumbling infrastructure, restore the millions of jobs lost amid the pandemic, and help families with education, and health and child care.

“We need to invest in things our families care about and need the most,” Biden told the crowd in Duluth, vowing to put corporations and wealthy Americans on the hook for the tab.

“It’s about time the very wealthy and corporations start paying their fair share,” Biden said. “I’m not going to bore you with the details, but no one making under $400,000 a year is going to pay a single additional penny in tax,” Biden said.

Biden plans to pay for his proposals by hiking the corporate tax rate and changing provisions that let multinational companies reduce their tax burden by investing offshore and shifting profits. He also plans to raise the top income and capital gains tax rates, changing the taxation of wealthy estates and ramping up IRS enforcement to cut down on tax evasion.

Both spending proposals have drawn sharply critical reactions from Republicans—and more muted criticism from some Democrats—for their lofty price tags. If adopted in their current form, the proposals would, along with the American Rescue Plan, bring the Biden administration’s early-term spending to a massive $6 trillion.

Sen. Mitt Romney (R-Utah), known for his willingness to work across the aisle, took aim at the spending level in an April 29 tweet: “In his first 100 days, the President has proposed $6 trillion in new spending—about 4x our total federal budget!” Romney argued that the sky-high spending would saddle future generations with decades of interest costs and jeopardize their future.

Biden’s proposals also represent a dramatic shift from the kind of politics that seek to contain government.

Sen. Roy Blunt (R-Mo.), a member of the Republican leadership, called Biden “well-intentioned,” but added that “the proposals he made are overwhelming in terms of a new footprint for the government, and a new level of government spending.”

Critical reactions on the part of some Democrats, though far more muted than Republicans, suggest Biden’s push for $4 trillion in new federal spending is a major gamble.

Sen. Joe Manchin (D-W.Va.), who holds a key swing vote in the evenly-split Senate, said on April 28 that he’s “very uncomfortable” with the overall cost of Biden’s proposals, citing concerns about public debt.

“I don’t know how much more debt—we’re $28.2 trillion now in debt. There’s a balance to be had and we got to work that out,” he added.

Biden is scheduled to travel to Pennsylvania and Virginia in the days ahead to promote his spending and tax plans.