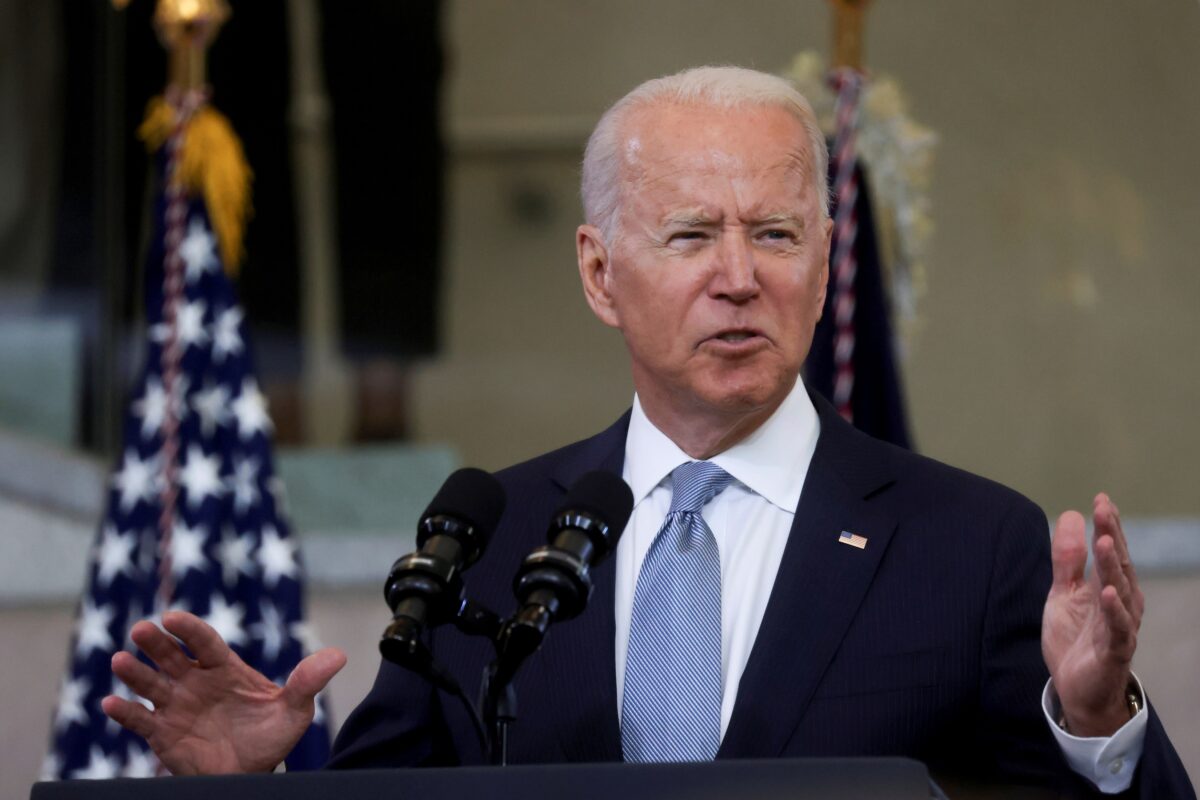 President Joe Biden on Tuesday disparaged laws and proposals that proponents say are aimed at strengthening election security, claiming they are “racially discriminatory.”

“This year alone, 17 states have enacted—not just proposed, but enacted—28 new laws to make it harder for Americans to vote, not to mention—and catch this—nearly 400 additional bills Republican members of the state legislatures are trying to pass,” Biden said.

As auditors in Arizona’s largest county near the end of their work, and shortly after Pennsylvania lawmakers initiated a forensic investigation of the 2020 election in three counties, Biden noted that multiple states already completed recounts and certain types of audits. He said it was not hyperbole to declare that the election was “the most examined” in the nation’s history.

Solutions to challenges to the vote include legislation—Biden vowed to sign the For the People Act and the John Lewis Voting Rights Advancement Act if Congress passes them—and the hammer of the Department of Justice, which is focusing on making sure voters have access to polls, scrutinizing audits, and taking legal action like suing over the new Georgia law.

“We’ve got to shore up our election system and address the threats of election subversion, not just from abroad—which I spent time with [Russian President Vladimir Putin talking about]—but from home,” Biden said.

The president was speaking from the National Constitution Center in Philadelphia.

Democrats largely oppose any further examination of the 2020 election. Many oppose virtually any election security measures, such as requiring identification, even though some of the measures enjoy broad support from the American public.

Biden and other Democrats have at times promoted false information about the Georgia law and other election reform proposals. The Georgia law implemented reforms like limiting the number of drop boxes in a county and requiring they be placed inside buildings and continually monitored, while also expanding early voting and continuing to allow no-excuse mail-in voting.

Georgia Gov. Brian Kemp, a Republican in his first term, responded to Biden’s speech by alleging it was part of the president’s “continued assault on election integrity and common-sense measures supported by a wide majority of Americans.”

Texas Rep. Lacey Hull, a Republican, added Wednesday that the bill being protested by Democrats “does not harm voting.”

“This bill will make it easy to vote and hard to cheat,” she said on “Fox & Friends.”

Texas Democrats fled the state to try to prevent passage of the bill. They face arrest.

Biden backed the play and Vice President Kamala Harris plans to meet with the legislators this week, White House deputy press secretary Karine Jean-Pierre told reporters on Air Force One as the president flew to Pennsylvania.

“Why are they so concerned that a President, who never goes anywhere, would hop onto beautiful Air Force One and head to Philadelphia if it were an honest election?” Trump said in a statement. “Why not let the audit go forward and make everybody, on both sides, happy?”