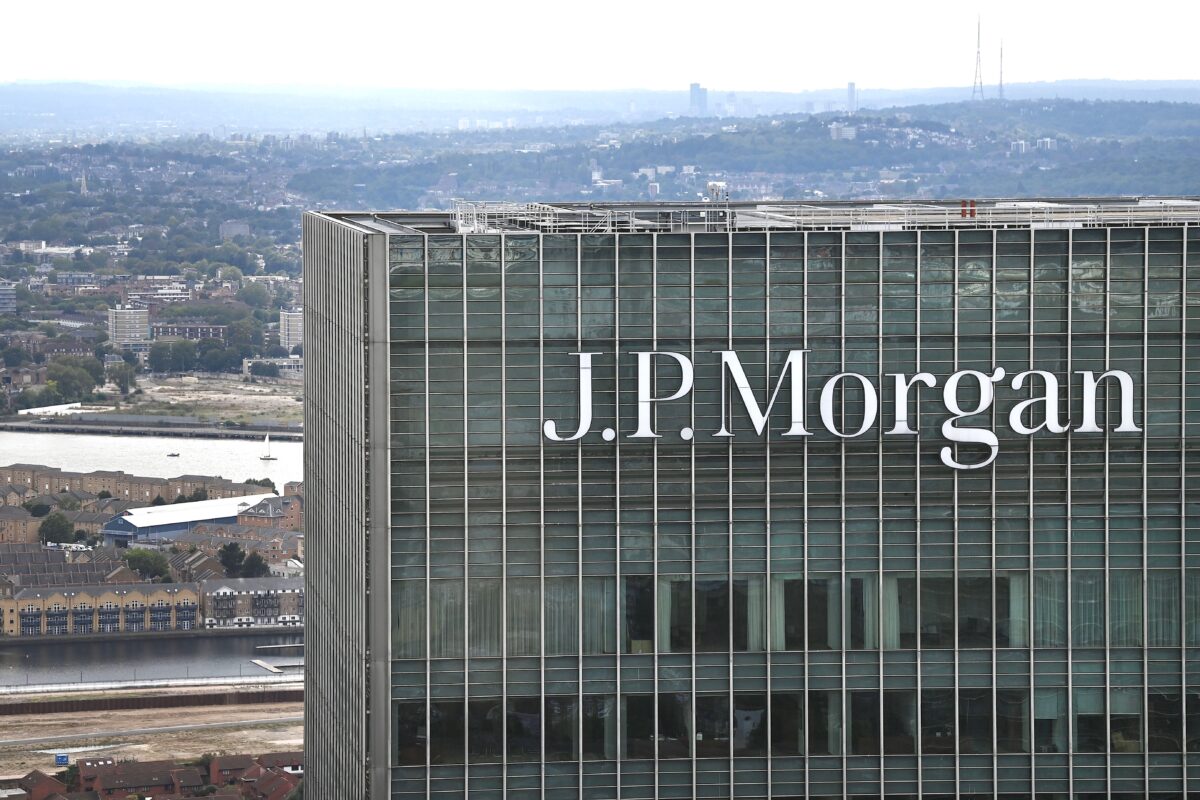 Trillions in financing pledged by banks to climate change projects present an unprecedented gamble that could end up in potentially the largest government bailout ever seen, warned several experts on environmental policy and investment.

Many of the world’s largest banks have recently made pledges to direct trillions in investments to projects meant to fight climate change and achieve “sustainable development.”

Bank of America pledged $445 billion by 2030; Goldman Sachs and Morgan Stanley each promised $750 billion by 2030; CitiGroup promised $1 trillion by 2030; and JPMorgan Chase committed to $2.5 trillion in 10 years. Dozens of other large banks have joined the UN-backed Net-Zero Banking Alliance, promising not only to slash carbon emissions from their own operations, but also push their clients to do the same.

It would be one thing if the financial institutions were talking about their own money. But that’s not the case. Most of the money is supposed to come from investors, large or small, whose cash the banks direct to companies that fit the climate bill.

A review of the commitments also reveal the companies appear to operate with a broad definition of fighting climate change. It would apparently include undertakings such as wind and solar manufacturing, more energy efficient buildings, and research into “clean” energy sources. But it also includes other causes such as affordable housing development, gender equality, and racial diversity.

All these endeavors would get access to investment dollars that wouldn’t be available to others. Those unwilling to get on the agenda shall be discriminated against, including through “exclusion policies” and “divestment,” according to the Net-Zero Banking Alliance guidelines.

The banks are portraying the initiatives as motivated by a stroke of conscience regarding the effects of climate change. Many scientists predict that unless carbon emissions are drastically cut, the planet will see more severe natural disasters, such as flooding and droughts. Other scientists question such catastrophic climate predictions, which hold a poor track record of coming true.

But it’s not just the goodness of corporate hearts prompting the pledges, several experts told The Epoch Times. Banks are acting with the understanding the climate projects will be backed by governments.

“It just seems like the politically salient thing to do for the banks,” said Nicolas Loris, environmental policy economist at the conservative Heritage Foundation.

Playing along with the Biden plan allows the banks to “potentially be protected and also reap some of the opportunities to have taxpayers offset some of the risk,” he said.

“They are the No. 1 benefactors. It’s not the environment. All this climate stuff is perpetuated and pushed forward by multi-billion dollar corporations who make billions of dollars on the backs of these so-called programs,” he said with a warning that “if this goes wrong, there’s only one solution for it, which is a federal government bailout.”

Loris acknowledged this is indeed a risk.

“The amount of money we’re talking even just moving forward, especially in the form of the government subsidizing certain investment decisions, certainly extends the risk to the taxpayer in magnitudes we haven’t really seen before,” he said.

President Joe Biden recently made comments that seemed to lay the groundwork for that eventuality.

“The private sector can’t meet these challenges alone,” he said at his recent virtual Climate Summit. “Governments need to step up and they need to lead. We have a role to play in making sure that material climate risks to financial systems are measured, disclosed, and mitigated. If Wall Street is pumping billions of dollars into businesses, it could be turned upside down when the next storm comes. And we know there will be more storms.”

“Wall Street made clear the risk it’s taking on. The dollars being invested are often the hard-earned savings of our workers, pensions. We can’t take steps to protect our workers if we don’t step up. We have to be able to move forward from a downside deal then into the upside and strengthen the resilience of our financial system.”

“It will require mobilizing finance at an absolutely unprecedented level,” he said at the summit. “And it will require governments to help facilitate the net zero transition around the world.

Government’s involvement in the economy to such an extent constitutes a power grab, the experts said.

“Once the government starts getting involved in these types of activities it’s certainly hard to pull out,” Loris said.

As famed economist Friedrich Hayek warned in his 1943 book “The Road to Serfdom,” government control of the economy, however well intentioned, inevitably leads to political tyranny.

“It’s a domino effect that will result in the end of the free market, it will be a government controlled market by the end of 2040 if it keeps down this path,” Santos said.

But even though the government may stay to regulate and commandeer, it may not necessarily continue to sufficiently fund.

Biden is now lubricating his spending package with language of economic stimulus to counter the COVID-19 pandemic—even though infrastructure spending does virtually nothing to boost the economy in the short term. But next time there may not be such an opportunity and the banks and other companies buying into the initiative would be wise to consider it, according to Santos.

“They’re playing politics and they’re trying to appease the current administration and the White House. But they’re forgetting one thing: If the next administration comes in or the next two administrations come in and don’t support this agenda of theirs and choose not to bail them out, at the end of the day, the investors and the principals within these institutions are the ones that are going to be hurting the most,” he said.

He anticipates $3 trillion to $4 trillion will last about four years.

If Santos’s warning comes true, it could go roughly like this:

A solar panel manufacturer applies for a government contract made available through the Biden administration’s “infrastructure” initiative. The manufacturer invests substantial sums into all the paperwork required by the contract bidding process, including environmental assessments and a plethora of “sustainability,” “racial justice and equity,” and other requirements. He hires compliance officers and consultants to ensure the papers are in order and the proposal has a greater chance of being accepted.

A year or two later, the contract is granted, requiring the manufacturer to decline private clients and greatly expand capacity to be able to fulfil it. The expansion of the manufacturing plant, the hiring process, the workplace rules, the supply chain all have to comply with federal regulations and the specific rules of the contract, making them substantially more onerous and expensive. More compliance officers and consultants are hired. A major part of the management process is consumed by compliance with regulations.

The government pays more than private clients, but nowhere near enough to cover the expansion. The manufacturer goes to a bank to get one of the climate financing deals. The bank agrees to provide a preferential “green” loan and include the firm into its “green investment” portfolio, which will provide a massive cash infusion contingent on the firm’s compliance with carbon footprint reduction targets, “racial justice and equity,” and other requirements. Cue in compliance officers and consultants.

A few years later, the manufacturer fulfills the contract. A huge solar farm is opened and all the politicians, bankers, union leaders, and business executives congratulate each other. By this time, Biden’s administration is over and all the money from his initiatives are spent. Government contracts are fewer and private clients aren’t willing to pay the same prices. Moreover, the plant is quickly getting obsolete. The company tries to cut costs and diversify into other industry sectors, but is informed that doing so would run the risk of breaking the bank requirements for its “sustainable” designation, triggering severe penalties.

It’s not just this one company. Many companies are in similar situations. The banks are trying to keep the loans viable at least on paper as writing them off would hurt their balance sheets. They allow the companies to repeatedly roll over the loans, kicking the can down the road. Eventually, the banks break the bad news: Unless “something” is done, a catastrophic cascade of bankruptcies will happen, with hundreds of thousands losing their jobs, small investors losing their life savings, and the entire economy being severely affected. Congress concedes the “human cost” would be too high and devises a “rescue package.” The taxpayer is left holding the bag.

This would still be an optimistic scenario that presumes no corruption, no cheating, and no major economic downturn along the way.

Biden framed his policy as good both for the economy and the environment.

“Those who do take action and make bold investments in their people and in a clean energy future will win the good jobs of tomorrow and make their economies more resilient and more competitive,” he said.

But Loris pointed out that the government spending often crowds out private projects that would have created jobs too, likely more of them than it creates.

Santos, whose investment firm holds stakes in these ventures, argued that even if they are to be phased out, at least the current workers should be allowed to continue until retirement.

“There’s generations and at least another 30 years of good work in several of these industries that are going to be killed because of a very radical agenda,” he said.