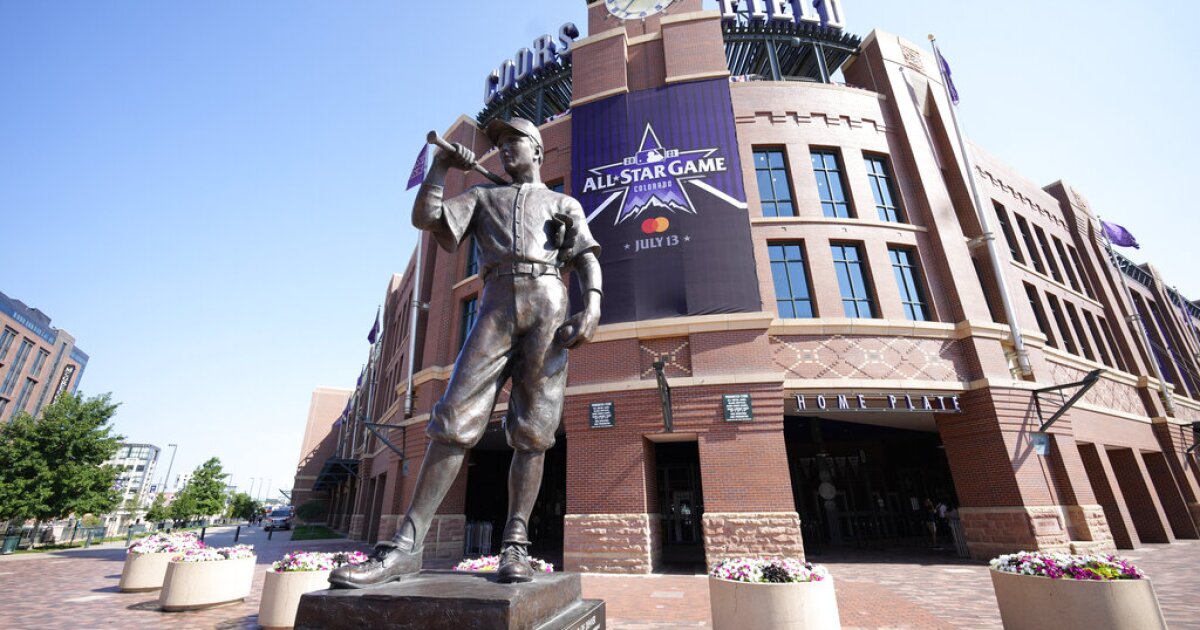 ATLANTA — Russ Russo remembers the summer of 2000 fondly. He and his father Albert made the 13-hour drive from New Jersey to Atlanta for a boys trip that was capped off with the All-Star Game at Turner Field. Pop star Brandy sang the national anthem, Hank Aaron threw out the ceremonial first pitch, and Derek Jeter was named MVP.

“It was one of the best weekends in my life,” he told the Washington Examiner.

But tragedy struck the Russo family late last year when Albert died due to complications from a stroke. It was hard on everyone, but as a tribute, Russo wanted to recreate the “magic” of 2000 with his sons Robert and Daniel. The trio made plans to drive down to Atlanta to spend the week together bonding over baseball and memories.

“We were looking forward to it but … what are you going to do?” Russo said, standing under a gigantic red Atlanta Braves sign steps away from Truist Park, the 41,000-seat stadium that had been scheduled to host this year's Major League Baseball All-Star Game.

The event was supposed to catapult Atlanta and its small businesses out of a prolonged COVID-19 slump but instead created a messy scandal that pitted politics against activism and profit.

It started when the GOP-controlled state Legislature passed the Election Integrity Act, which was signed in March by Gov. Brian Kemp.

The law made sweeping changes to the state's absentee voter rules, added new voter identification mandates, cut in half the amount of time voters have to request mail-in ballots, limited the use of ballot drop boxes, and gave state lawmakers more power to oversee the process.

Republicans claimed it was a much-needed overhaul of Georgia's election code and that it would expand voter access in the state. Democrats, including President Joe Biden, slammed it as a “Jim Crow in the 21st century” law that would disproportionately discriminate against minorities.

One week after Kemp signed it, several Atlanta-based corporations waded into the controversy. Coca-Cola called the new law “wrong” and “a step backward,” while Delta's CEO said it was “unacceptable.”

Then came the calls for MLB to move the midsummer classic out of the city, which it did. Baseball Commissioner Rob Manfred said the MLB “fundamentally supports voting rights for all Americans and opposes restrictions to the ballot box.”

Abrams, a very vocal critic of the new election laws, commended the MLB's players, owners, and commissioner for speaking out and urged others to do the same. She added that she worried the boycotts would hurt the state economically.

Atlanta's Democratic Mayor Keisha Lance Bottoms likened the MLB venue change to the “first of many dominoes to fall” and predicted an economic tsunami headed the city's way.

Just as elections have consequences, so do the actions of those who are elected. Unfortunately, the removal of the @MLB All Star game from GA is likely the 1st of many dominoes to fall, until the unnecessary barriers put in place to restrict access to the ballot box are removed.

Kemp vowed Georgians “will not be bullied” and would “continue to stand up for secure, accessible, fair elections.” At one point, though, he said the millions of dollars in lost revenue was worth it.

As the politics played out, Georgia businesses, many of which were struggling to make ends meet, got caught in the crossfire.

“We've been holding on with our fingernails and keeping our businesses running with duct tape and bubble gum,” said Brian Maloo, the owner of Manuel's Tavern, an Atlanta establishment frequented by politicians and reporters. Maloo estimated he would lose about $6,000 in sales and added that having the All-Star Game in Atlanta would have signaled that the city was back in business.

Atlanta officials have said the MLB's decision to relocate Tuesday's game will cost the region an estimated $100 million in lost tourism. MLB officials purportedly signed partnership contracts with businesses and venues across Cobb County, which included reserving thousands of hotel rooms for league officials, players, and fans in the area.

At the Battery Atlanta, a 2 million-square-foot mixed-use development located steps from the ballpark, some of the boutique businesses told the Washington Examiner they feel like their livelihoods have been recklessly toyed with to score cheap political points.

“Why do this to us? What do we have to do with it?” Will Wilkson, the assistant manager at River Street Sweets, said. “I feel like [city and state officials] are telling us, ‘Too bad. It sucks to be you!'”

There have been multiple (unsuccessful) attempts to lure the game back.

“MLB's decision to punish Atlanta's small businesses and residents who bear no responsibility for their state's political action was wrong — no matter what one judge says,” Ortiz told the Washington Examiner. He added, “It's a dangerous precedent, and MLB knows that. For starters, it will intimidate other states from passing any laws that will draw the attention and ire of woke mobs.”

John Seay, a founding Partner at Carter + Woodard, an Atlanta firm specializing in entertainment, told the Washington Examiner the move felt disingenuous from the start.

“I thought that the MLB pulling [the game] was dumb and that it sends the wrong message and penalizes the wrong people,” Seay said. “They know if they really wanted to make a stand here, then they should have kept that game and made some statement or done some voting drive that would have made a difference without hurting people or disappointing children who wanted to go to the game with their dads.”

Denver has been raking in the dough, while Atlanta business owners and fans like the Russos are still coming to terms with being both a casualty of COVID-19 and state politics.

Mayor Michael Hancock said Thursday that not only will All-Star week make Denver's restaurants, shops, and hotels millions of dollars but that it would also raise the city's profile nationally and internationally.

When the 2008 Democratic National Convention came to Denver, tourism boomed and local businesses made money hand over fist. Small fortunes were spent at shops, restaurants, hotels, and local attractions. Hancock anticipated there would be a similar performance during this year's All-Star Game festivities.

Unlike most cities that get a two-year planning period, Denver had only 13 weeks to prepare for the high-profile summer event.

Denver's advantage was that its city government had spent five years polishing a plan to present to the MLB for an All-Star Game of its own. The city first tried for 2022, then 2024, but after rumors began bubbling about a possible Atlanta pullout, state and city officials went to work. Colorado Gov. Jared Polis called Hancock, Manfred, and Rockies owner Dick Monfort. The city's marketing arm, Visit Denver, began sending messages to MLB that the city's hotels and convention center could accommodate the July game.

Hancock also called Bottoms to give her the heads-up that Denver would be pitching a proposal to bring the game to Coors Field.

“I think [MLB] were looking for, in my mind's eye, a city and state that had normalized a successful election process, so it would not be controversial when it was announced who they were choosing,” Hancock told the Denver Post.

Georgia, though, may get the last laugh.

The National Republican Senatorial Committee will be airing an attack ad during Tuesday's game to remind viewers the game was supposed to be held in Georgia.

The ad focuses on the economic impact of the move and blames “the radical Left.”

“Baseball's midsummer classic, the All-Star Game: A $100 million boost to Georgia's economy, until the radical left, woke crowd took it all away, forcing the MLB to boycott Georgia,” the ad's voice-over said.

The whole thing has tarnished the memory Russo had of his father and one he wanted to pass on to his sons.

“Baseball is not about politics, nor should it be,” he said. “This didn't need to happen.”