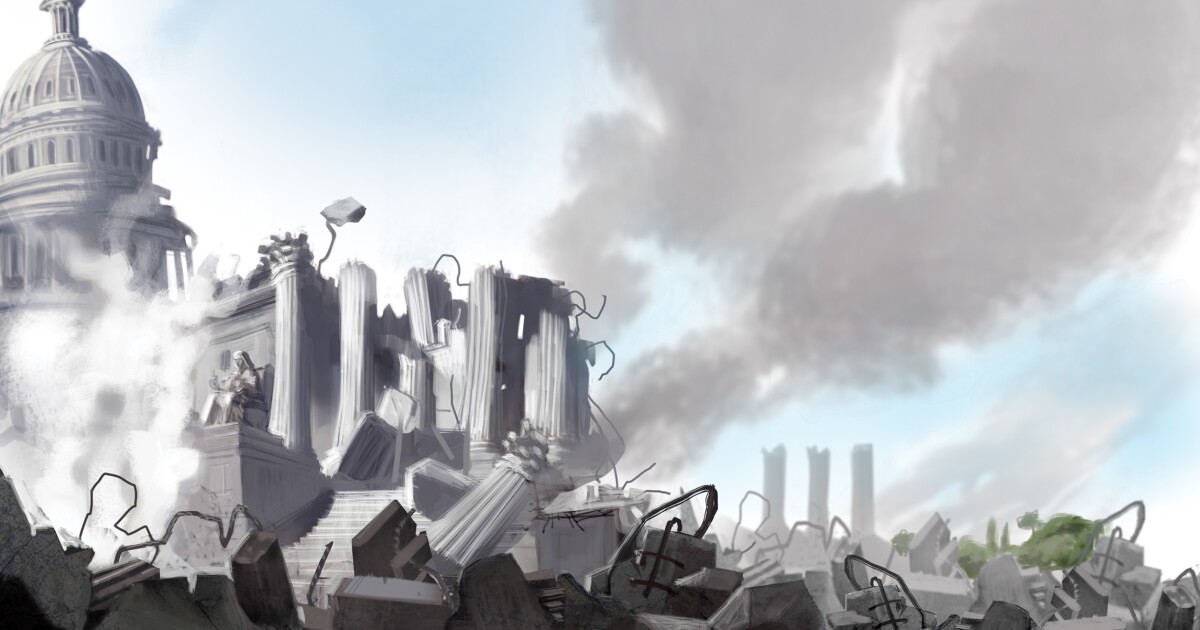 Saddled with nominal control of the Senate but a vanishingly narrow working majority, Democrats have, of late, taken to venting their frustrations on the filibuster. It is not that the country is basically split down the middle, and has been for the better part of four decades. It is that their party is the natural governing majority, but the ancient institutions of our government keep them from realizing the will of the people. The filibuster, by requiring a majority of three-fifths of the Senate to end debate before a final vote, must therefore be eliminated. That way, the Senate can function properly, the government can represent the people, and democracy can be salvaged.

Cloaked in claims of “increasing democracy,” who could object? But dig a little deeper, and one finds that in their attacks on the filibuster, the Democrats are, in truth, pulling upon a thread that, if tugged too tightly, could unravel the entire Senate, and therefore the balance of the deliberately constructed system of government.

The Senate runs according to a series of precedents, traditions, and, above all, the 44 “standing” rules of the chamber (differentiating them from the House rules, which expire at the end of every Congress). The apparent purpose of the rules is to manage business within the Senate, but they often read like a bill of senatorial rights, stopping the rest of the body from infringing on the prerogatives of other members. Rule XIX of the Senate is of central significance:

“When a Senator desires to speak, he shall rise and address the Presiding Officer, and shall not proceed until he is recognized, and the Presiding Officer shall recognize the Senator who shall first address him. No Senator shall interrupt another Senator in debate without his consent … and no Senator shall speak more than twice upon any one question in debate on the same legislative day without leave of the Senate, which shall be determined without debate.”

This is radically different from the House of Representatives, where the speaker of the House works in conjunction with the majority leader and the Rules Committee to limit sharply who can say what on the floor. There is no Senate rules committee, and members are free to discuss any matter they want at virtually any time they want for any length they want.

Rule XIX seems completely impractical to honor in full: Every senator can talk for as long as they are able on any subject, twice per legislative day. That allows for 200 completely unregulated speeches. How on Earth does the Senate get anything done?

The answer points to the ingenuity of generations of senators who together built the institution into its modern form. Senators collectively choose not to abuse these liberties, out of a shared incentive to protect their place in the American political hierarchy. Regardless of political ideology or partisanship, they all join in a shared commitment to maintain their institution’s prestige and, by extension, their own preeminence.

Being a senator places one in the upper tier of both the federal system and (perhaps even more importantly) the lawmaker's home state politics. Maintaining that position requires a delicate balancing act: Senators must ensure that the chamber is a reasonably effective governing institution (so it is worth being a member of) while appearing to be important members of it (so they can claim to wield real power). That means being a visibly prominent senator without speechifying away the time at the expense of actually getting stuff done. After all, if every senator spent all possible time peacocking around the chamber, they would all look important but grind Senate action to a complete halt. On the other hand, an effective, efficient Senate is great, but a nameless, faceless senator will have a hard time convincing voters that she’s the one who needs to be there from her state.

This is why the lingua franca of the Senate, that which bridges the gap between Republicans and Democrats, conservatives and liberals, is the unanimous consent agreement.

Put simply, these are 100-member deals that dispense with the rules (and thus the privileges of each senator) on a given matter so that the Senate can conduct business more efficiently. If you watch C-SPAN 2 for any length of time, you will almost invariably see senators seek unanimous consent for one thing or another. Behind the scenes, the leaders of both parties regularly hammer out agreements like this to schedule legislative business, adjourn, or accomplish some other managerial task. They are essential to legislative business, great and small.

The limitation of unanimous consent agreements is that on matters of controversy, senators are not going to mutually agree to forbear. Take an issue like abortion: To prevent the policy needle on abortion from moving rightward, liberal senators will employ the full spectrum of their privileges; conservatives would do likewise to prevent it from moving leftward. If the Senate is to get anything done on matters for which there are disputes among them, then some standard less than unanimity is necessary; otherwise, we would see endless filibustering (broadly defined as employing permissible legislative tactics to stop Senate business).

But how, in light of this necessity, does the Senate keep from backsliding into another version of the House — where the majority rules and individual members cannot place their own personal stamp on most policies?

The Senate’s answer for the last hundred or so years has been the cloture vote. Filibusters can be brought to an end by the vote of 60 out of 100 senators. This strikes a balance between protecting the individuality of the members of the institution while promoting its overall efficiency — a majority can work its will, but it must be greater than a simple majority. In most situations, the majority party must reach across the aisle to compromise with the minority, at least on the margins. This ensures that a broad spectrum of senators can participate, and thus claim credit for legislative successes.

One can debate the merits of the filibuster and the cloture vote required to bring it to an end. Without doubt, it slows business down in the Senate and in recent years has distorted a whole host of legislative functions, such as the appropriations process, that are best done by regular order instead of the last-minute omnibus bills that have become de rigueur. On the other hand, the filibuster forces the two sides to work together and keeps the tenor of public laws from swinging wildly back and forth depending upon which party holds a governing trifecta.

But what Senate Democrats are contemplating is called the “nuclear option” for a reason, overturning the filibuster by precedent. Essentially, that would happen if the majority leader raises a point of order that a simple majority was needed for cloture, the Senate’s presiding officer rules otherwise, but then his ruling is overturned by majority vote. That way, the new precedent would be that the members of the institution collectively agree that cloture requires a simple majority. Such an action could very well destroy the Senate as it has existed for 221 years.

Return to that basic calculus each individual senator makes every time he grants unanimous consent: the mutual benefits brought by the facilitation of the orderly conduct of mundane business. But if a bare majority can scrap the filibuster, what incentive will minority members have to continue to defer? Little to none. Instead of trading their visibility for legislative influence, they’d be unilaterally giving up their visibility so the majority can make them irrelevant, too. The basic bargain undergirding the functioning of the Senate will have been abrogated. Their preeminence having been sacrificed for the sake of productivity, in service to an agenda that they fundamentally oppose, they will be doubly incentivized to withhold unanimous consent on everything. They will need other tools to stop bad policy, and they will also need to assert their influence.

This is why Republican leader Mitch McConnell has warned of a “nuclear winter” should the Democrats dispense with the filibuster. It would come because the minority would no longer have a reason to restrain itself. The majority would have to be present for an endless array of procedural votes, fostered by only a handful of minority members. Indeed, under the present rules, half a dozen senators could grind day-to-day business to a virtual standstill.

What happens next would be anybody’s guess. Having permanently destroyed Rule XXII, which governs the filibuster, without having actually repealed it, the majority might respond by effectively nullifying other rules, declaring senators out of order for doing that which the rules otherwise allow. The minority on the Republican side might respond with delaying action via a series of “vanishing quorums” — the Constitution requires that a majority of senators be present for the Senate to conduct any business, and the vice president does not count for those purposes. So, a Republican might suggest the absence of a quorum, depart the chamber while the roll is taken, and temporarily shut down business while the Democrats (who only count 50 senators in their caucus) wait for the sergeant-at-arms to bring enough Republicans back.

This is merely speculation, though. The reality is that breaking the filibuster, and the resulting response by the minority, would be like turning the U.S. Senate into Humpty Dumpty: Once the centuries-old balance between individual preeminence and collective action is broken, it cannot be rebuilt again, at least not as it was. Either the Senate will turn into a nullity of an institution, accomplishing nothing amid endless debates about the most trivial matters, or it would come to look like the House of Representatives in its narrow majoritarianism and indifference to the individual views of senators.

Admittedly, it is true that when Democrats went “nuclear” over judicial nominations in 2015, the Senate did not fall into such an abyss. But it is important to keep in mind the relatively narrow scope of the Senate’s executive calendar. Eliminating the filibuster for presidential appointments was a drastic but nevertheless constrained tactic. Most senatorial business was unaffected. Eliminating the filibuster on general legislation is a different matter altogether.

And therein lies the essence of the actual debate over the filibuster. The Senate itself hangs in the balance. Conservatives who cherish our institutions of government should appreciate that the effect, if not the intention, of the progressive movement’s proposed power play is to destroy the world’s greatest deliberative body, while the Left should have the honesty and integrity to admit that it is effectively willing to destroy the Senate to advance its ideological agenda.

Jay Cost is a visiting fellow at the American Enterprise Institute and a visiting scholar at Grove City College.