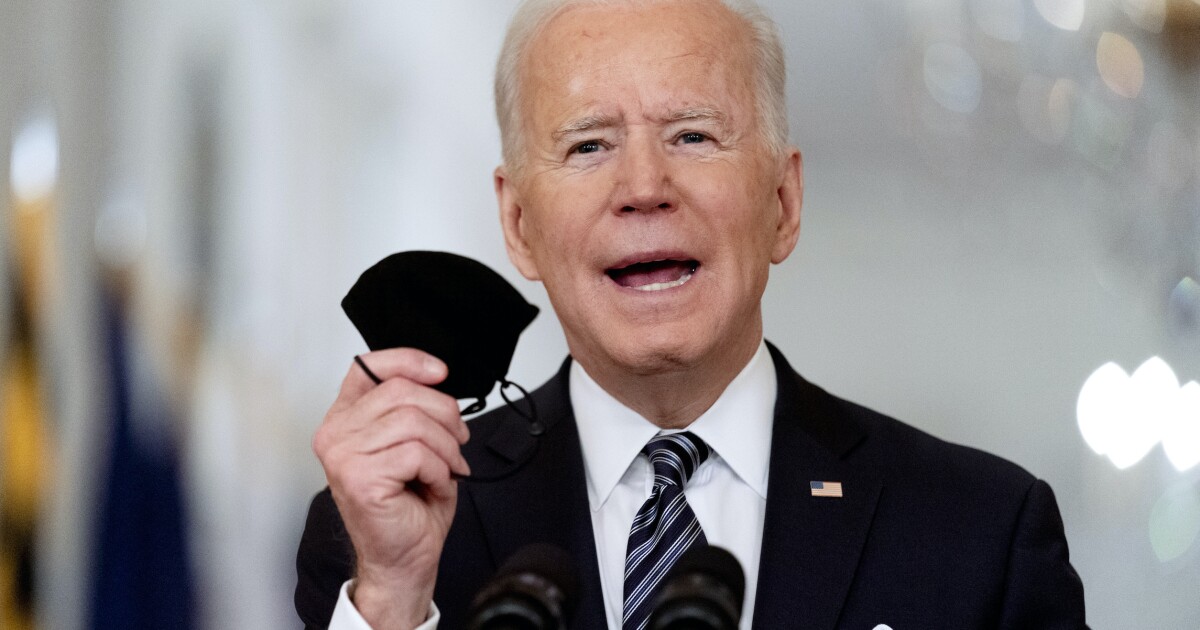 President Joe Biden’s first 100 days in office have been marked by ambitious spending plans and chaos at the U.S.-Mexico border.

Whether the spending can alleviate the pandemic and its associated economic crisis without inflicting crippling new taxes and debt will go a long way toward determining Biden’s success. The border crisis is presently the biggest area in which voters already view him as a failure — for now.

“A billion here, a billion there, and pretty soon, you’re talking about real money,” is the old Washington quote often attributed to onetime Senate Republican leader Everett Dirksen. Under Biden, the figure is $2 trillion and soon could grow much larger.

Biden has already signed into law an “American Rescue Plan” that weighed in at $1.9 trillion, with the president selling it as an economic response to the pandemic. He then unveiled a nearly $2.3 trillion infrastructure and jobs bill. Before Congress could act on that, Biden followed up on Wednesday with an “American Family Plan” that comes with a price tag of $1.8 trillion.

Republicans liken it to the approach the Democrats took with the passage of Obamacare when Biden was vice president: Get as much through as possible while the president’s party is in the majority, regardless of the consequences in the midterm elections. Democratic strategists told the Washington Examiner that if Biden can get COVID-19 shots into people’s arms, employees back to work, and children back in schools, voters will be pleased — and everything else will be GOP noise.

When Democrats passed Obamacare in 2010 and the last broad-based federal tax increase in 1993, they held large majorities in both houses of Congress. Next year, Democrats will defend the barest majorities, just 222 seats in the 435-member House and a 50-50 deadlocked Senate.

Republicans argue that only a fraction of Biden’s big plans are spent on their stated aims of infrastructure, the catchall category under which the White House is justifying the two not-yet-passed packages, and the coronavirus, with a more aggressive liberal agenda than the president campaigned on last year dominating both spending packages. But the White House has already announced a tour promoting what the president has done with his time in office so far, with press secretary Jen Psaki telling reporters he will “take the case directly to the American people about the vital need for action on the Jobs Plan and the Families Plan.”

Biden’s job approval ratings at the 100-day mark are modest by historical standards, exceeding only former Presidents Donald Trump’s and Gerald Ford’s — a factor in why Trump remains much-mentioned by the White House since moving to Florida. But on his major priorities so far, Biden fares better. A CNN poll released on Wednesday found that 59% believe he is doing a good job keeping his campaign promises and 66% think he is handling the pandemic well. The margins are tighter on the economy and how he is handling his role as commander in chief, with 50% approval on taxes and just 48% on foreign affairs potentially signaling trouble ahead, but they exceed the percentage of respondents who disapprove.

One area in which Biden is underwater in most polling: immigration. The CNN poll found that 65% disapprove of his handling of the migrant surge at the border to only 29% who approved. The public classified the situation as a “crisis,” a word the administration pointedly tries to avoid, by a 78% to 19% margin.

Biden had promised during the campaign to be more welcoming at the border than his predecessor, proposing a pathway to citizenship for most of the illegal immigrants already here. Upon taking office, he suspended border wall construction, paused most deportations for 100 days, stopped forcing asylum-seekers to wait in Mexico while their claims are being processed, and terminated bilateral agreements that allowed the United States to send asylum-seekers to Central American countries to seek protection there instead. “Biden’s open-borders agenda has created a border crisis,” said Tommy Pigott, the Republican National Committee’s rapid response director, in a roundup of Biden’s first 100 days.

Biden has also proposed tax increases to offset his mounting proposals for new spending amid concerns on his own economic team that too much debt would become financially unsustainable. The president wants his infrastructure plan to be paid for by hiking the corporate tax rate from 21% to 28% and other reforms of the corporate tax structure, many in response to changes made in the 2017 Tax Cuts and Jobs Act, which Trump signed into law.

The Biden administration claims that the Trump tax cut incentivized offshoring, although proponents of the bill have refuted that notion. William McBride, vice president of federal tax and economic policy with the Tax Foundation, told the Washington Examiner earlier this month that corporate inversions ended after the bill was signed into law and said his group has found “no evidence” of increased levels of offshoring.

The “American Families Plan” would provide two years of free community college and free preschool. The administration plans to pay for this package by increasing the top individual income tax rate to the pre-2017 level of 39.6% and taxing capital gains for households making more than $1 million as ordinary income.

The tax increases could have a deleterious impact on the economy, which otherwise has improved at a greater-than-expected rate than initially forecast when Biden became president. Jobs reports in both February and March beat expectations as people continue to get vaccinated and leave home to spend money in places of business. The administration has touted its “Build Back Better” plans to continue rebuilding the economy as the country digs out from the pandemic.

Biden has also sought to fulfill campaign promises on climate change. He hosted a climate summit with world leaders this month, loudly reinserting the U.S. into the Paris Agreement with a pledge to cut greenhouse gas emissions in half by 2030.

His infrastructure package includes massive spending to deploy clean energy, subsidize electric vehicle purchases, and mandate utilities use 100% carbon-free electricity by 2035. This has led detractors to label it a Trojan horse for the more sweeping and controversial Green New Deal. The bill also includes measures to assist fossil fuel-dependent regions vulnerable to Biden's clean energy push in an appeal to unions irked by the president's early moves to cancel the Keystone XL oil pipeline and ban the issuance of new oil and gas leases on public lands.

Biden will be challenged to appease the sometimes competing demands of unions and environmentalists as his big ideas get turned into legislation, and he faces hard choices to maintain the support of pro-fossil fuel Democrats such as Sen. Joe Manchin of West Virginia, who are wary of the president's aggressive targets to move off coal, oil, and gas.

The president campaigned as a bipartisan deal-maker based on his 36 years in the Senate and eight years as vice president, where he often served as former President Barack Obama’s point man in negotiations with congressional Republicans.

But he has so far avoided major bipartisan compromises, bypassing Senate Republicans on the American Rescue Plan and eyeing skeptically the GOP counteroffer on infrastructure. While Biden won in large part because he carved into Trump’s margins among suburban voters, he also turned out voters loyal to socialist Sen. Bernie Sanders, who vowed to help this become the “most progressive” administration since Franklin D. Roosevelt — comparisons the president encouraged in a White House meeting with historians.

On foreign affairs, Biden has attempted to contrast himself with Trump, repeatedly telling allies, “America is back.” He would like to reenter the Iran nuclear deal, from which Trump removed the U.S. But there have been areas of continuity as well. Biden announced full U.S. withdrawal from Afghanistan by the 20th anniversary of the Sept. 11, 2001, terrorist attacks that led to the war. Trump had wanted to end American involvement in the Afghan war by May.

Republicans have, in turn, portrayed Biden as too solicitous of Europe and not firm enough in dealings with China or Iran. In addition to fewer than half of respondents approving of his handling of these issues, CNN’s poll found 52% felt the same about his performance as commander in chief.